Smile / This Is How I Feel

Here is the true story behind the song lyrics to the song “Smile” by Pearl Jam, straight from the horse’s mouth or rather Frogs pen. I write this in response to everyone’s idea of what the lyrics are, where they came from, from the perspective of someone who was there and lived it. Eddie Vedder invited us to play 2 shows with Pearl Jam when they came to Milwaukee on July 8th and 9th of 1995 @ the Marcus Amphitheater. During the 1st show, side story, I was doing my climb on top of speakers or something high routine, whereupon jumping across to make my leap, I misjudged the length in the air and my shin hit the side of an anvil flight case, as mother would say,”full blast” (one of mother’s phrases, Dennis and I would laugh about). I could feel it at the time “smarting” (sounds like one of mother’s winner words) but in show biz the show goes on. After the show, I sat down on the steps backstage, rolled back my green sequined pants and discovered my calf resembled a giant bowling pin. The emergency room’s suggested remedy was ice. The next day I awoke and could barely lift my leg, it felt like it weighed a 100 lbs. I called in sick to my day job. That night for the show on July 9th, I could barely lift my leg to stomp on the pedal board, yet still managed to jump into the crowd that night. O.K. back to the gist of this “extraordinary” story about the song. On July 9th, 1995, Eddie came over to our house in the afternoon, and when the ice cream truck came down our street he ran with Dennis’ children, Paul and Sarah and bought them some ice cream. What does this have to do with story behind the song lyrics to the song “Smile” by Pearl Jam, were about to get into the incredible details right about now. Later in the afternoon, we drove Eddie back to the venue for soundcheck. On the way to the summerfest grounds, Dennis played Eddie a song of mine, “This Is How I Feel” that I wrote on June 6, 1995 and completed on June 11, 1995. The lyrics read as follows:

The verses chords (E minor 7/A minor 7th mirror the overly sad and boring tone matching the lyrics to a t or perhaps u (you). (The song “Smile” has a similar chord progression adding B minor chord for a total of 3 chords back and forth (E minor / A minor/ B minor/A minor). The notes and chords suddenly fall in a : G Major/ D Major (Gb in Bass) /F Diminished pattern that commences on the word “sad”. Reverting back to the E minor 7/ this time A 7 progression giving hope and creating supreme tension on the word “appeal” with the C minor touch. The “I’ll live over and over and over again” section, E minor / F Major climbing on the word “live” A minor/ Bb Major/ D minor/ Eb Major 7 rising to the top on the highest chord on the word “again”. The “Don’t it make you cry, when the sky don’t shine” section begins on G Major, reinstates the point on the C major chord, repeating the phrase “Don’t it make you cry” and ultimately the C minor producing once again the agonic affect.

So let us awaken and return once again to the aforementioned breathtaking tale. What was it again, oh yeah, that’s right. the song “Smile”. After the 2nd show on July 9th, 1995, Dennis and I were backstage sitting on a couch in Pearl jam’s dressing room. When Dennis spotted Eddie’s notebook, he picked it up. Dennis asked me what the lyrics to my song “This Is How I Feel” were. I told him. He asked me if I was o.k. with what he wrote in Eddie’s notebook. He was showing me what he was writing, adding the word “you” before the word “smile” and saying that, “When the sun don’t shine” was better than my, “When the sky don’t shine”. Dennis also drew 3 crooked hearts and swirls on the notebook page. So when Eddie sings “3 crooked hearts, swirls all around” that is what he is referring to. Here indeed is what Dennis wrote in Eddie’s notebook:

So one day Eddie rang Dennis up and told him that he used what he wrote in his notebook for a song on the new Pearl Jam album, a song called “Smile”. And that is how “Smile” was born. At the end of the day and at the beginning of the day, the song was put in motion from Dennis writing in his notebook. Why am I writing this now? I heard someone on the radio recently say, “If you’re silent, you may as well be dead”, and that’s how I’ve been all these years. The question of how the song came into being has never been asked. I’ve done 4 interviews in 32 and a half years and out of those, the only phone interview I’ve ever done, the interviewer says before the interview ever starts, “I know what you’re all about”. Really? How does that work? Have you ever been in my presence, looked me in the eye, kissed me, held me, made love to me, spoken to me, listened to me, understood me for a long enough period of time and space to even speculate a glimpse? Dennis has spoken for 4 hours over the phone for interviewers and in the end they write 10 lines. We played a show in Chicago and Kelley Deal’s parents came to the show. After the show Kelley introduced her parents to Dennis. Kelley’s father’s introduction and greeting to Dennis (bypassing the traditional, “Hi my name is blah, blah, blah”), was “We know what you’re all about”. I don’t take well to insults. Am I being disrespectful to Dennis by talking about this? I don’t believe so. I had my issues with Dennis, still I loved him and understood him absolutely. I was driving in my car the other day and asked Dennis if he was alright? Then I looked @ the sky and there were what looked like spotlights coming down from the sun that appeared and reminded me of the beginning of the “Kissed Lips = Hell” video. I took that as a yes. “Don’t it make you smile on the other side”. 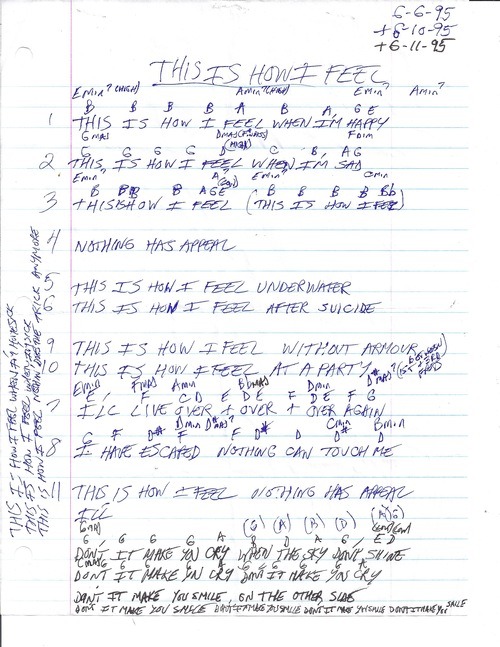 from Tumblr https://ift.tt/2XMQfbG
via IFTTT
Posted by Listen Up Network at 11:28 AM